Church of the Covenant Boston

The Upjohn Building and Architecture 1865

In an area of Boston filled with cultural monuments and architectural splendor, Church of the Covenant is an architectural and artistic landmark which has been designated a National Historic Landmark.
​
​Richard Upjohn’s masterful urban Gothic style of the Church of the Covenant (Central Congregational) is a wonderful example of Gothic Revival architecture.  Here medieval Gothic architecture was interpreted for a new age using American materials.  The local Roxbury pudding stone facade gives the building texture and varied color, with purple, orange and brown highlights. The architecture has Gothic ornamentation, with designs and battlement style spires, but the ornamentation does not overwhelm the building. 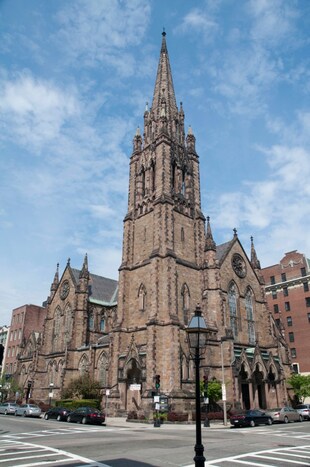 Corner of Newbury and Berkeley Streets
Architect and writer Ralph Adams Cram singled out the church as an example of when “the Gothic revival… resulted for a time in serious, dignified, and self-respecting churches, such as  the Central Church here in Boston.”  According to church records, “the Upjohn insisted that a high Gothic edifice be erected that no dwelling house would over-top.”  At 80 ft. high, 80 ft. wide and 121 feet long, the church is the width and height of a Gothic cathedral and half the length—a foreshortened Gothic cathedral commanding a prominent corner in the Back Bay.  When it was built, the spire soared above Boston as the highest point in the city.  At 237 feet, it was higher than the largest public memorial in America, the Bunker Hill Monument in nearby Charlestown and remained the tallest building in Boston until 1915.

Writer Oliver Wendell Holmes thought the Central Church spire was among the best in the world.  In One Hundred Days in Europe (1887) he compared it to the finest he had seen in his travels and concluded that…
Exterior Construction 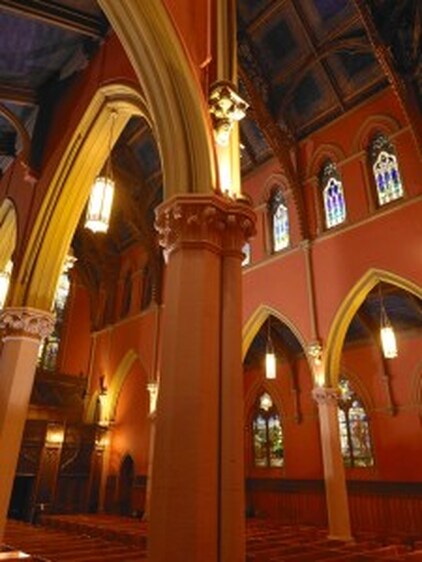 Church records show that the architects desired to use the whole lot for the church sanctuary vs. the church’s desire to include a chapel and sanctuary on the lot. Ultimately, the church would not purchase additional land, so as a compromise the chancel was cut-down to accommodate a chapel behind.
​

With the spire uncompleted, it was seriously proposed to leave it unfinished since $250,000 had already been contracted and spent and no contractor would agree to a set price for the spire completion because of the high cost of labor and materials.  Ultimately, it was complete by day labor with money raised as construction continued.
The pews and all other interior wood work were in black walnut.  The walls were simply covered with a neutral colored paint.  The lighting was done by a row of thickly set gas jets entirely around the top of each column.
CONTACT US